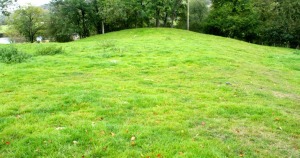 Gwerclas cairn has never , as far as we know been excavated therefore classification has largely depended on a series of observations and surveys . Despite having been lately identified as a Bronze Age round Barrow it displays all the features of having been constructed at some time during the Neolithic period .

The long Barrows were funerary monuments of the Neolithic . The chambers of the barrows were often covered by capstones and burials were deposited over a period sometimes over a thousand years . They sometimes show evidence of ceremonial and ritual use .Excavations elsewhere have shown that fires were lit outside the tombs and deposits of animal and human bone have been discovered in a ‘ritual’ context .

Gwerclas is a large , long mound which is somewhat denuded through the activity of  erosion and farming over a long period 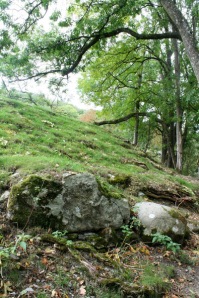 The kerbstones above indicate the entrance may have been in this area of the body of the cairn.

The location of the Gwerclas tomb is interesting . The monument lies near to the River Dee and a historic crossing point .Views to the river from the cairn indicate that the River was possibly a focal point for the tomb builders .

A possible Neolithic ceremonial cursus monument has been identified across the Dee from Gwerclas at SJ06204343  and is known as the Corwen Cursus .  The cursus runs for  approximately 120 metres on a SSW-NNE alignment. The ditches  are around 27m apart and there is a ring ditch close to the northern end.

The  burial site may have been somehow linked to the cursus in some way although any theories have to be conjectural in the light of an excavation evidence which links the two .

The implications for a developed ritual landscape in this area are the focus for further research.
OS Reference : SJ05394213

Corwen and Dee Valley Archaeological Society was founded in order to  research, promote and share the rich archaeological heritage of the Dee Valley and surrounding area .

It is the aim of the society to research and record through desktop studies and fieldwork the archaeological landscape of the Dee Valley from around 5000BC through to the post medieval period .

The earliest surviving monuments represented in the Dee Valley  are the funerary monuments  Tan y Coed, Cynwyd, being the best preserved example and probably dating to the earlier / middle neolithic .

Surveys undertaken by CPAT / Clwyd Powys Archaeological Trust indicate that certain areas were favoured as what we term Funerary and Ritual Landscapes . This is apparent in the Llandrillo area with the occurrence of stone circles, tombs and reference to a cursus monument . The landscape for whatever reasons which are lost to us held deep significance for the people who lived here in the Neolithic and Bronze Age . The chambered cairns and stone circles represent a ritual landscape of archaeological importance and worthy of further research, investigation and analysis.

A Life In Fragments

~ weird and wonderful blogging from the Welsh Marches ~

The Dee Valley is an area rich in archaeology, history folklore and mythology . This is what our Blog is all about

The Art and Craft of Blogging

The latest news on WordPress.com and the WordPress community.